Here is a intertwining graph showing the positions of every driver throughout the race in 2007 Canadian Grand Prix. Lewis Hamilton took his first victory here at Montreal.

Every driver’s starting position is shown at the bottom of the graph, going up until the end of the race. Hamilton is being represented in gold, as you can see, he was leading throughout the race with the lead lost briefly to Felipe Massa. Impressive driving from a rookie driver!

All drivers that failed to finish the race are represented with dashed line.

Before anyone is confuse; It was unexpected high degradation at the end, but strategy undoubtedly the best one! The same of Gros or Perez..

McLaren’s Lewis Hamilton became the seventh different winner in as many races in a slow-burn Canadian Grand Prix that came alive in the final laps. Hamilton fought up from third place past Fernando Alonso and Sebastian Vettel in the closing laps. Alonso’s one-stop strategy, Hamilton did two, failed – he dropped from the lead to fifth as his tyres faded. He was passed by Romain Grosjean’s Lotus, Sauber’s Sergio Perez and Vettel, who made a late second stop.

Read the full report on the BBC here.

A great team result in Canada this afternoon, as Romain clinched his best ever F1 result in P2 while Kimi brought home a hatful of points in P8! Check out pictures and the full report on the Lotus F1 Team website! Just follow the link below:

“When you start 15th and there is no rain or chaos you don’t really expect to finish on the podium. We were quite aggressive today. The strategy and the pit stop have been very good and I was able to overtake a few cars. I saw that for me the tyre degradation wasn’t so bad and this allowed me to manage my pace quite well. We have a quick car but since Malaysia we have been unlucky for one reason or another, and then yesterday we had such a disappointing qualifying. Today’s result is a great reward for all the guys who work hard. The last time I scored points I was also on the podium and think this is quite a nice way to do it. Also it is particularly sweet to have been at the podium ceremony here in Montreal because we are not too far from my home country and there are many Mexicans here. It is a great boost for the team and I am very pleased for everybody.” 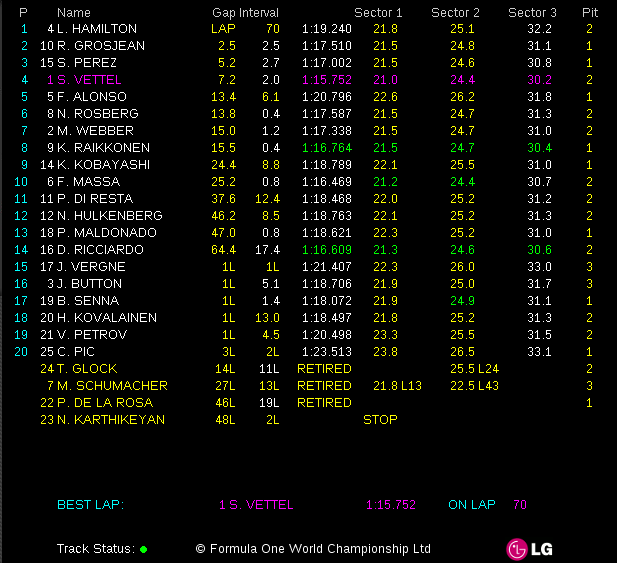