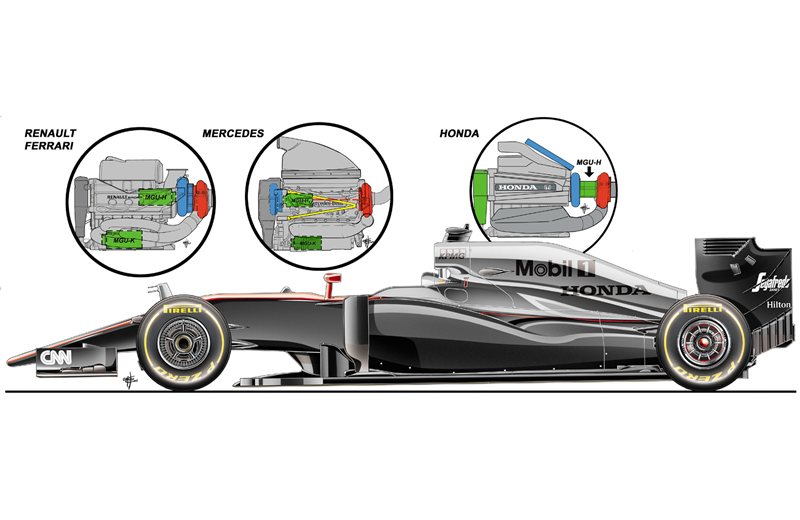 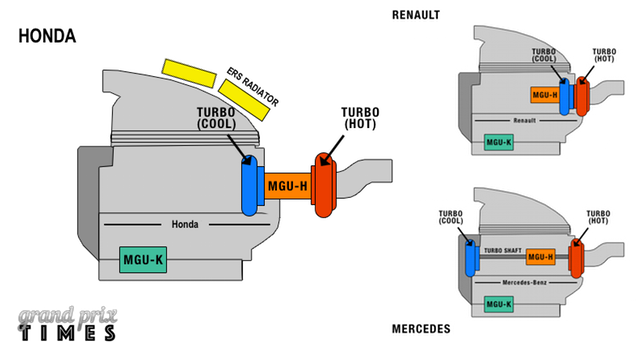 McLaren and Honda endured a fragmented pre-season test programme, with mechanical issues meaning they spent more time in the garage than they did on track. However, the newly-reunited partners are determined to get on top of their early problems, and once they do their unique power unit layout could pay dividends. We take an exclusive look under the skin of the MP4-30.

Before their return to F1 racing with McLaren this year, there was plenty of speculation about how Honda would choose to lay out their new RA615H power unit.

The assumption was that the Japanese company would follow Mercedes’ ultra-successful approach of positioning the compressor (highlighted in blue) and turbine (highlighted in red) at either ends of the internal combustion engine with the MGU-H (upper green component) in the middle.

The big advantage of this layout, as opposed to the approach used by Renault and Ferrari – who chose to put the compressor and turbine next to each other and the MGU-H at the rear of the engine – was that it reduced the unit’s cooling requirement whilst improving overall efficiency.

Honda, however, have chosen to follow a different approach to all three manufacturers, positioning the MGU-H between the compressor and turbine at the rear of the engine, and the MGU-K at the front. Whether this unique solution proves to be an ace up McLaren’s sleeve, or indeed something of a hindrance, remains to be seen.