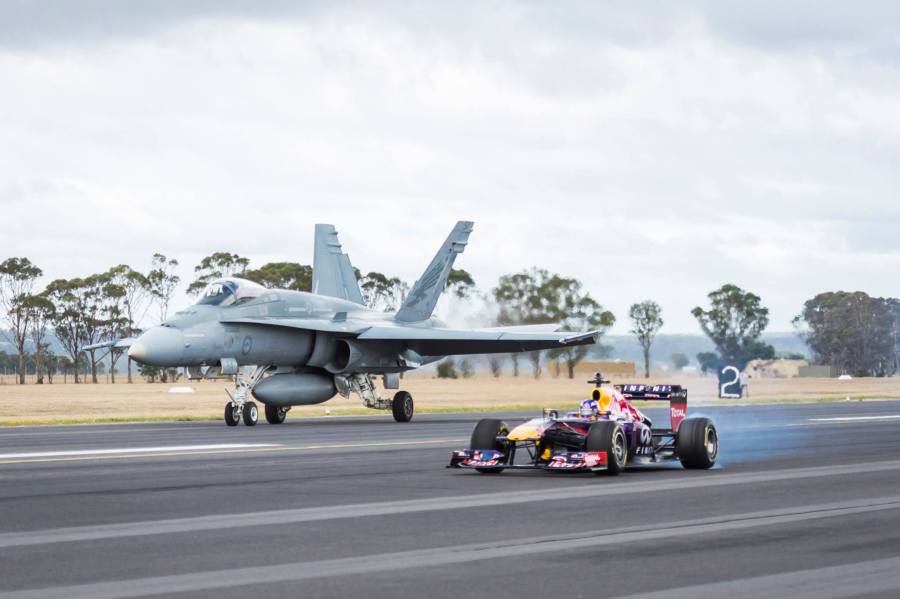 Infiniti Red Bull Racing’s Daniel Ricciardo has compared his incredible day job to that of a Royal Australian Air Force Pilot today with a run around at a regional Air Force Base.

With the 2014 Formula 1 Rolex Australia Grand Prix hitting the streets of Melbourne this weekend, Ricciardo and F/A-18 Hornet pilot, FLTLT Michael Keightley got the adrenaline pumping with an occupation comparison of larger-than-life proportions. It can be argued that both have two of the best careers in the world. Although they have different crafts, they push themselves beyond what’s possible on a daily basis.

“The craziest part was looking in my mirrors and seeing a Hornet – I’m just used to other Formula 1 car behind me,” Daniel Ricciardo said.

“It was very surreal. I definitely felt the pure power of the Hornet and as it passed me I was just hoping that it wasn’t going to blow me off the track. It make what I do seems low level compared to that!

“I can’t wait to get on track now. Having a home race is awesome, Albert Park is one of my top five favourite circuits.”